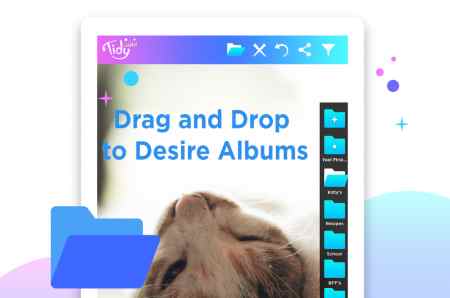 On that Version we have added the option Organize your Photos and Videos with simple drag and drop.

☆ want to know the current location of the image, open the “information bar”

☆ Tap on the keep on the folders bar to keep the media in the current location.

☆ Organize the albums – move the album you want to the top with drag and drop on the folder bar.

☆ Delete media in the Organize mode is available by swiping to the left.

☆ All the Features of Tidy is available on Organize mode

learn more about Tidy –Storage Space Running Out? Tidy Will Help You Release It

Can I Compare similar photos?

Just tap on the right/left side of the screen to open the compare mode.

tap on the right side to move forward one picture and tap on the left side go back one picture. now – do it fast and see the smallest difference between your photos.

you don’t took the photos in the same time?

you can choose them by using “Pick Media” Filter